I went to the Arnolfini to see the work of Sophy Rickett called "To The River" and Shilpa Gupta. Ricketts latest installation "To The River" was inspired by the Severn Bore, Which is "an amazing phenomenon of nature whereby a large tidal wave runs along the River Severn during the moon's equinox" (Arnolfini - 2012) Her installation incorporates video using surround sound to create an intense effect on the environment which creates an atmosphere of anticipation imitating the crown on the banks next to the river, awaiting the tidal surge.
Within the room there was three projectors demonstrating crowds of spectators which could be perceived as claustrophobic at some points. 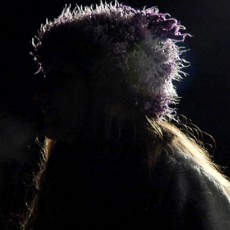 We then went upstairs to explore the other installations and the next one was created by Shilpa Gupta's and called "Singing Cloud". Gupta creates her work using a variety of media including video, objects and photography and also using sound to explore themes such as human rights, conflict, security and technology.
"Someone else" is a cluster of 4000 black microphones which is hung from the ceiling. The microphones emit sounds which travel "in ripples over the surface" (Arnolfini - 2012). It was created through various psychological tests on numerous individuals about the infliction of images. The atmosphere in the room felt very intense and everyone seemed mesmerised by the effect. 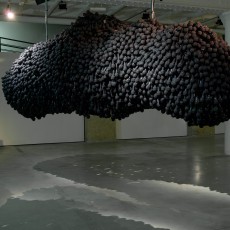 After the "Singing Cloud" Instillation the next project portrayed themes of "Borders and Crossing". The artwork consists of rolls of yellow tape which is marked with the phrase "There is no border here" in the shape of a flag. As an audience we are left to create our own ideas and response to this piece, looking at culture. I found it interesting how the last row of the "flag" has been left empty and the sentence has been stopped half way through writing it - saying "I tried very hard to cut..." 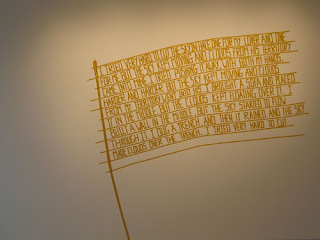 Images all sourced from "Arnolfini"